You are here: Home / Archives for Joy Ball 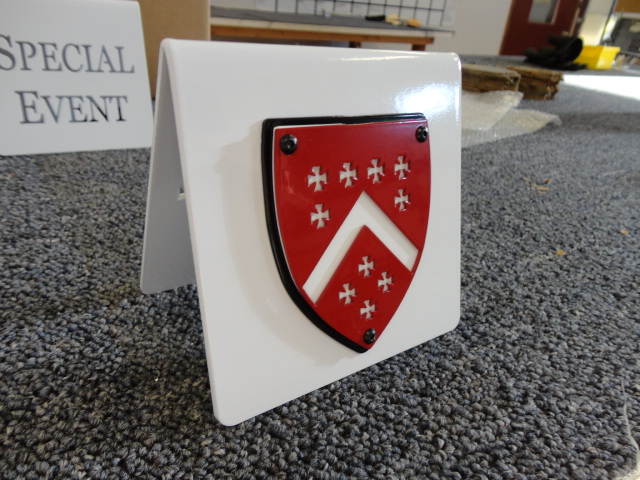 Just wanted to show a few of the things we have working in the shop right now.

First up, we’re remaking an order for Berkeley Hall. UPS suffered a train derailment during the one batch of bad weather we’ve had so far this year, and their entire shipment was destroyed! We got everything put back together, and it made it nice that I could snap a couple pictures, because they had some pretty good stuff.

They did some tournament signs – several that said “Closest to the Pin” and some that just said “Special Event”. These will sit on the tee box, and alert tourney participants that there is something special going on that hole. 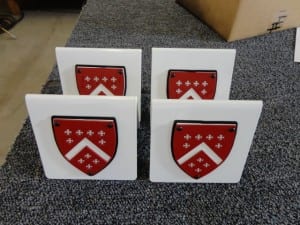 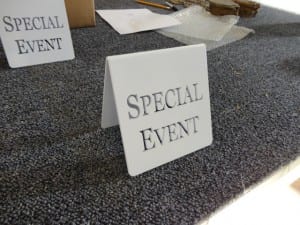 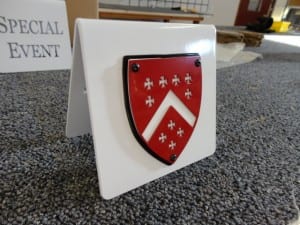 Here’s a picture of their proximity marker which works hand and hand with the signs. They can use the proximity marker to show the position, and record the name of, the current closest ball. 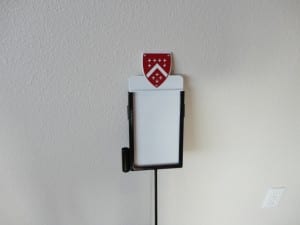 Here’s a picture of a couple large sand and seed boxes that we are building for PGA West. These are on their way over for powdercoating, we’ll get an after pic when they come back. The entire top lid is hinged and opens up to make it easy for the grounds crew to fill the box, but then there is a smaller lid for easy guest access. 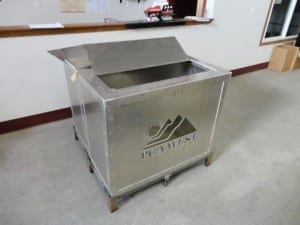 Here are some cart path directional signs we are doing for Southern Dunes. 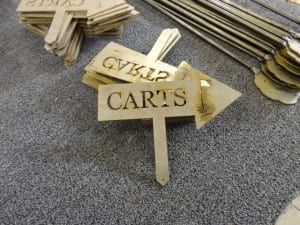 Here’s a brushed aluminum hole in one trophy that we did for a member at Hayden. It’s a great way to display the lucky ball, and record the pertinent information about the event. Congratulations, Jonah Anderson, on your hole in one! 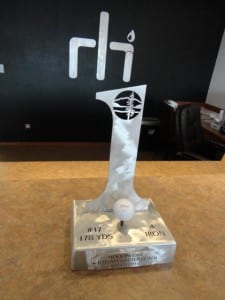 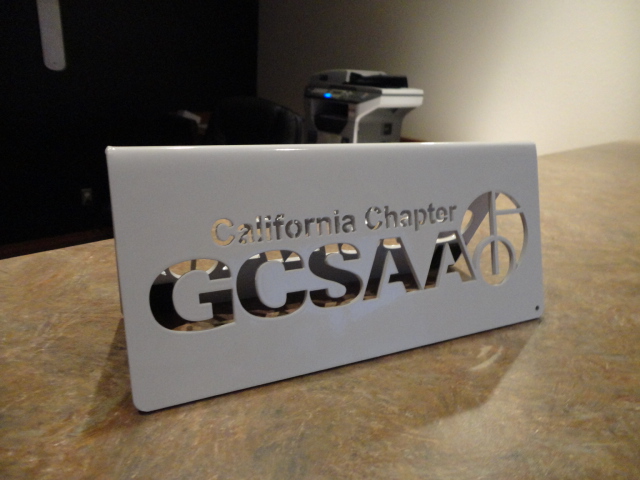 Here’s a picture sent to us from Selby at Bighorn.  She was helping organize their annual fundraiser for Breast Cancer Awareness and asked our Palm Springs rep, Kelly Burlile, if we could donate a sign.  It was a fun one, we don’t get to use pink very often around here! 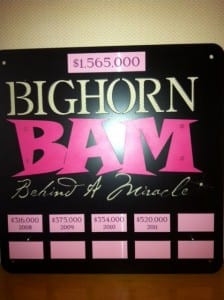 We also donated some event tee markers for the California chapter of the Golf Course Superintendants Association of America.  Their annual meeting was a great event, and our rep, John Vetter was able to have a good time and meet some great guys. 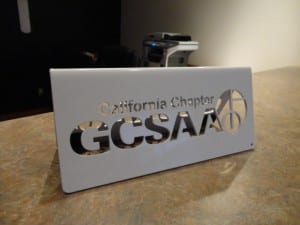 We were asked to help create some sample display pieces for a leather specialty company called Barrington.  This presented two challenges, first their logo was extremely complex and second, they wanted some work done with leather.  Turns out the hardest part of cutting the leather is just stretching it out and holding it down.  It cuts just fine at low pressure (15000 psi) without garnet.  The leather kind of stretches when it gets wet, but looks like it shrinks back down as it dries.

Anyway, check these out.  The logo turned out really well, and looks awesome against the leather.

Winter is finally here.  We got our first decent snow, and it’s cold!  I guess now we can claim that all of our products are tested under extreme conditions…

It’s Thanksgiving week and things are a little quiet, but there are a few things going out today.

Here are some tee markers we’ve done for Southern Dunes and Malibu Country Club.  They needed a few extras, so here’s a couple replacements…

Brown Golf owns serveral courses in the Southeast.  They are outfitting their teaching facility at Island West and Pinecrest.  Here are some signs that will go on the range with their logo on one side and a blank chalkboard on the back where they can write the lesson taker’s name.  They also purchased range spacers and some other ‘teaching area’ signs, but unfortunately the guys boxed them up before I could get a picture.

Just finishing up the Kapalua Tee Markers which should be ready to go out this week. Wanted to show a picture of the rendering vs. the real markers.

Unfortunately, the lighting is better in the renderings :)

On the real tee marker, the copper color is awesome. It might be my new favorite color we’ve used on anything. If I had my way we’d use it for every product on every course… Don’t like copper? Call us when you do…  Just kidding.  But it is pretty.

Fill out this form to let us know what you're interested in, and we will contact you quickly.